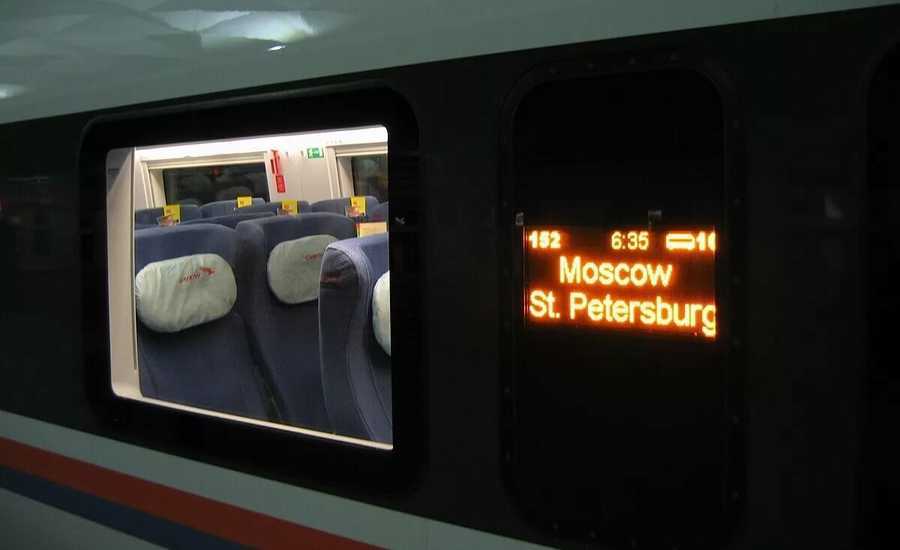 How do I get from Moscow to St Petersburg?

A person traveling from Moscow to St. Petersburg has many options. In the end, deciding on how to get there is mostly a question of time and comfort. This article will introduce you to the differences of going by plane, train and car/bus. 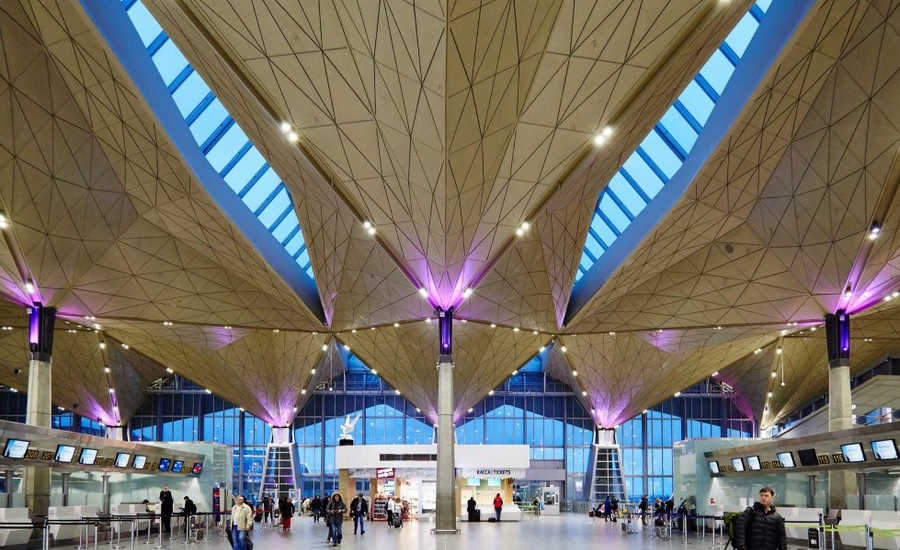 The most obvious idea might be to go by plane: it’s fast, inexpensive and fairly reliable. You spend about an hour and a half in the air and pay between ₽3000 and ₽13000 ($50 to $200) - depending on which kind of airline you choose and how early you book. According to Skyscanner, there are about 465 planes per week departing from Moscow to the Venice of the North. As with most cities however, the airports are not centrally located, so if you choose to fly keep in mind that you have to add time for transit. Also, Russia’s capital has three airports on three different ends of the city. Make sure you know where exactly you fly from before jumping into a bus or taxi — you don’t want to get off at the wrong airport, since it takes forever to readjust that mistake.
In Moscow, the quickest way to get to the airport is by Aeroexpress. The express train departs from different pick up points and runs every 30 to 60 minutes. A ride takes about 35 - 40 minutes and will cost you ₽500 ($8). In St. Petersburg, local buses and marshrutkas - privately run minibuses - frequently commute between the airport and the nearest metro station, Moskovskaya. One way is ₽40 ($1). From there you can use the metro to get into the city. All in all this will take you about an hour to 90 minutes. In the end, your overall travel time will add up to approximately 4 hours - plus the extra time you spend at the airport for check-in and luggage procedures. 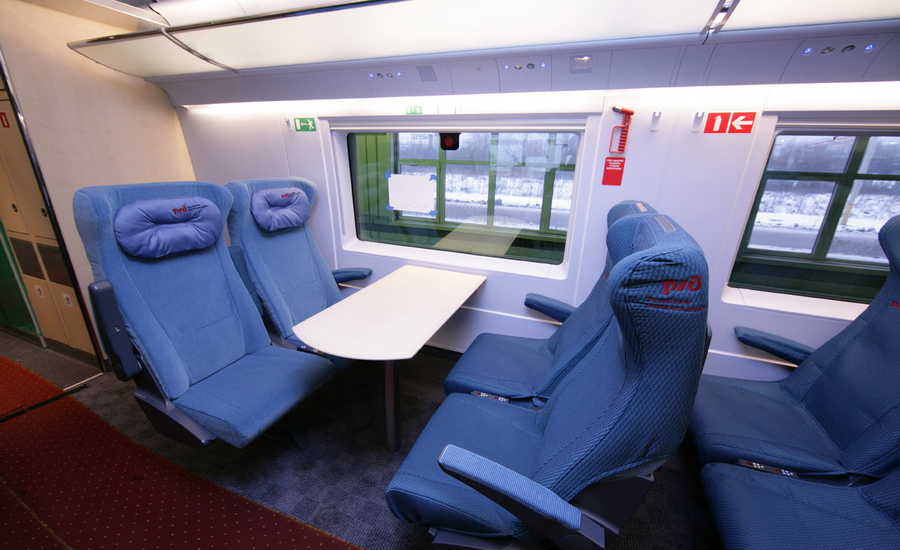 The high-speed train Sapsan (spelled "Сапсан" in Russian) brings you from Moscow to St. Petersburg in a record-breaking 4 hours and runs several times a day. If you book early enough, you can get a ticket for roughly ₽3000 (around $50). It’s a simple, comfortable and convenient way to travel. Sapsan rail cars are modern and equipped with everything you would expect in any Western train - adjustable backrests, reading lights, tables… first class seats even come with their own entertainment system and sockets to recharge your phone. If you know your itinerary about a week in advance, this is probably the best solution. Furthermore, the train station in St. Petersburg is located in the very heart of the city — no lengthy transit from airports required.
However, there is a second variant. For the true Russian experience, choose the night train. Ticket prices start at about ₽800 ($13) for a seat. If you invest a little bit more - around ₽1200 ($19) - you get a bed. This, however, doesn’t entitle you to your own cabin - it’s a bed in an open car with around 50 people. The night train takes between 7 to 10 hours, so you might want to spend that extra money to get some rest. Or you spend the night quietly talking to strangers and sharing tea, food and a mutual annoyance for the bathroom constantly being closed. If you’re traveling on a budget, or if you just want to be part of Russian everyday life for a while, this is your best bet. The night trains also have more comfortable classes, where you get a cabin for two or four people. Single cabins are also available.  If you’re interested in a deeper comparison between the different Russian trains before booking, this article will help you choose. However, booking train tickets via the national Russian railway website can sometimes be confusing. We’re here to make your life easier. Our website is completely in English and tailored to a traveler’s needs, plus it accepts all cards and passports.

PROs: cheap night trains, easy and comfortable journey, reliable and regular schedule
CONs: the Sapsan costs about as much as a plane ticket, booking tickets can sometimes be confusing, but our website is here to help you 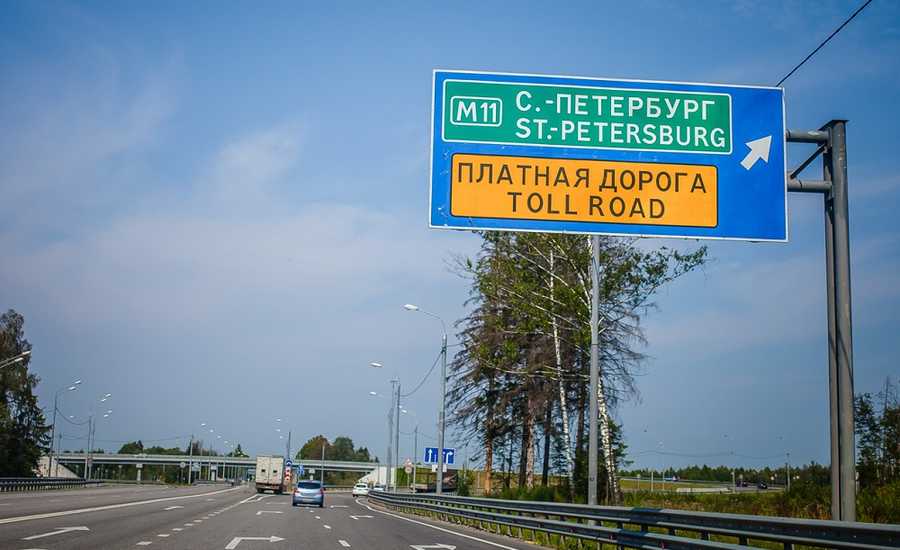 The last option is to go by car or bus. If you don’t want to drive yourself, blablacar offers rides starting from ₽1200 ($18). You will be in St. Petersburg approximately 8 hours later. Buses are slightly cheaper and in exchange take slightly longer.
By the end of the year, construction of the M-11 highway is said to be completed, which will significantly shorten the time for the trip. It is estimated that the journey will then take 5.5 hours, toll fees will be around ₽3000 ($50).

PROs: road trip! You get to see some of Russia’s landscape and it’s cheap and social
CONs: it takes as long as the night train, but is even less comfortable

St. Petersburg and Moscow are approximately 700 km apart. Whatever way of traveling you choose, the journey will take some time. Planes are affordable, speedy and efficient, but it’s likely to take longer than the train - especially if you have luggage. The Russian countryside between its two largest cities is also not very scenic, so if choose the car because you’re hoping for some photogenic landscape, you will probably be disappointed. As mentioned before, the go-to option is the train. Whether you’re on a budget or willing to pay for saved time and comfort, the train will safely get you to where you want to be.