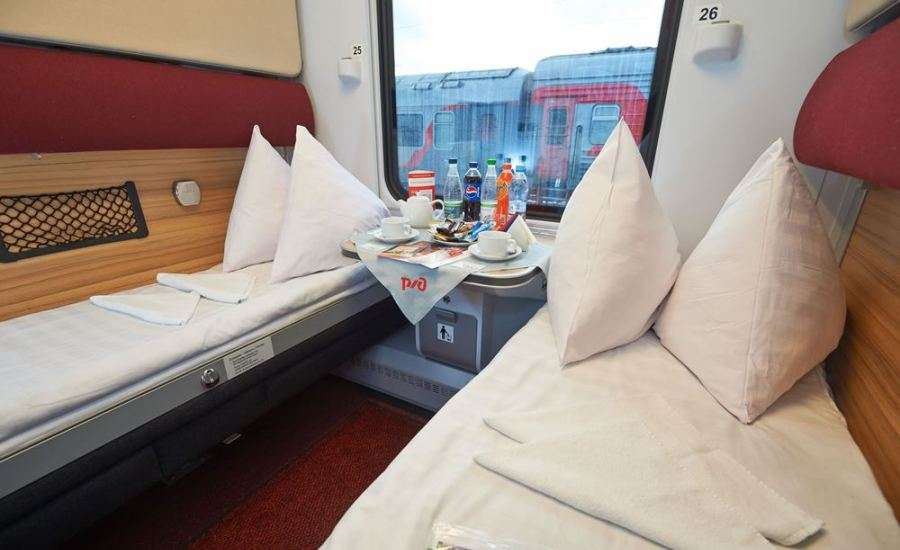 How does SV differ from other classes of cabin on Russian trains?

Though it may seem all fun and games, travelling by platzkart for more than two days will have even the most enthusiastic traveler drained, stinky and yearning for some privacy. True, the lack of barriers does mean that you’re fully exposed to Russian culture and are forced to socialize but, trust us, after two days all you’ll be able to think about about is kicking back on a freshly-made bed in peace and quiet without having to worry about whether you remembered to hide your phone away or set your alarm so that you get to the toilet before the morning queue starts. Whether your dream is to travel the whole of the Trans-Siberian railroad or just travel by overnight train from St Petersburg to Moscow, it’s definitely worth considering spending the extra money on an infinitely more comfortable SV (1st class) cabin, even if it’s only for part of the journey.

The naming of SV cabins has two origins. In Russian, SV stands for sleeper carriage as well as the “court’s car”, referring to its pre-revolutionary history when the imperial escort would accompany the Tsar in these carriages. Hence, SV can genuinely claim to offer a “royal experience”.

Almost all trains in Russia will have at least one SV (1st class) carriage along with kupe (2nd class) and platzkart (3rd class). In general, a space in SV will sell at double the price of a bed in kupe. 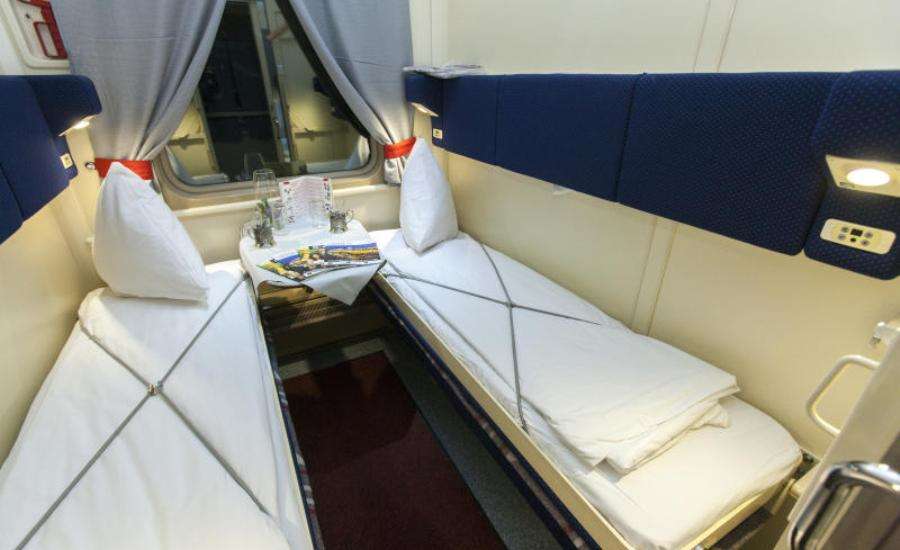 The distinguishing feature of first class compartments on Russian trains is the number and size of the beds in the cabin. Generally, a SV cabin will have two lower beds, though sometimes that can vary by +- 1 bed. With two less beds than a kupe, the extra space allows for wider and noticeably softer beds. Taller people especially will appreciate the fact that there isn’t a bed hanging directly over their head and the extra room allowed for baggage means that even the biggest of suitcases can be squeezed onboard. 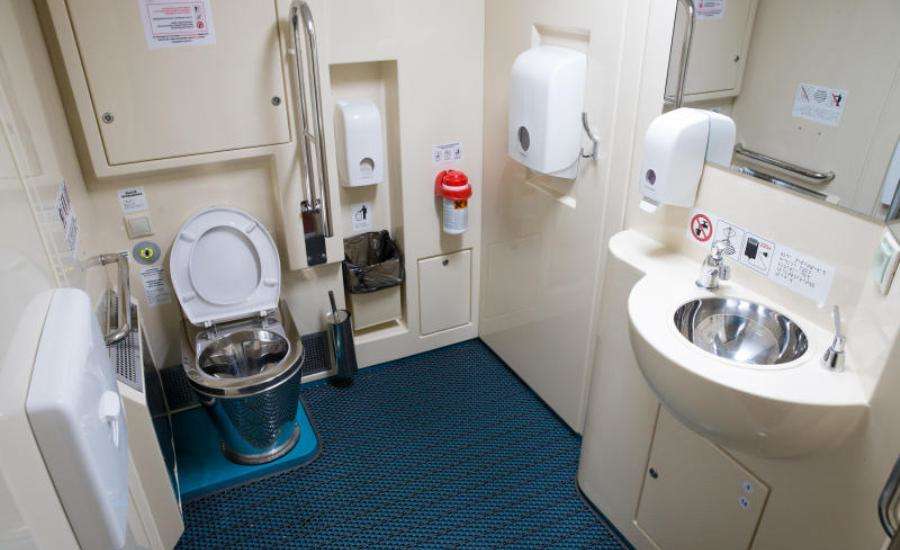 As there are only a maximum of nine cabins on an SV carriage, queues to the two toilets on either end of the carriage (which are sure to be immaculately clean) will be non-existent. Depending on the train, most cabins will even have a private washbasin and mirror. Most importantly, on longer journeys you can expect decent showering facilities which will either be complementary or available for a small fee, something which 2nd class in most cases unfortunately does not offer. 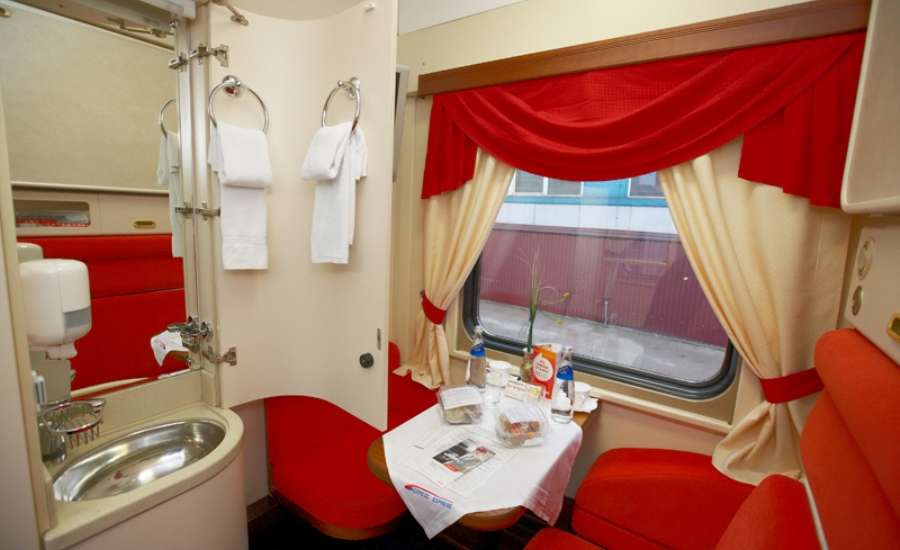 Upon visiting Russia you’ll soon discover that nothing is simple. When booking a train ticket it isn’t simply a matter of choosing a class of cabin; there are also classes of service and amenities that must be chosen. In SV, the following categories are available in descending order of quality: 1B, 1E, 1U and 1L. To the uninformed foreigner, it sounds like absolute gibberish but there are distinct differences between the classes. 1B stands for business class and one train ticket will buy the whole compartment with two beds, regardless of the number of passengers travelling. Hot, satisfying meals are provided free of charge along with a selection of non-alcoholic drinks and a complimentary platter of snacks and sweets in the cabin. The same range of amenities that you would expect to be provided with in a hotel, such as slippers, toiletries, newspapers, free Wi-Fi and a shoe kit, are also offered. Most importantly, 1B cabins have an en suite toilet. 1E offers the same suite of services as 1B, with only difference being that there is the possibility to pay for just one bed instead of both beds in the compartment. 1U has exactly the same cabin specifications as the higher classes, but all the amenities and additional services must be paid for separately, excepting bedding which is provided in all SV cabins. Though rare, on some trains there is a lower class of SV called 1L which like 1U does not include complimentary services. The cabins in 1L also do not contain a private bathroom.

Regardless of class of service, all first class train cabins contain a safe, sockets, a TV, spacious compartments for luggage and coats as well as a card with which to lock the door. The level of service from the conductors in first class is of a very high standard and you can be expected that all your needs will be met with a smile (a rarity in Russia!). It is also important to note that all 1st class passengers are permitted to bring a small pet with them in a suitable cage.

How does SV compare to Lux Class? 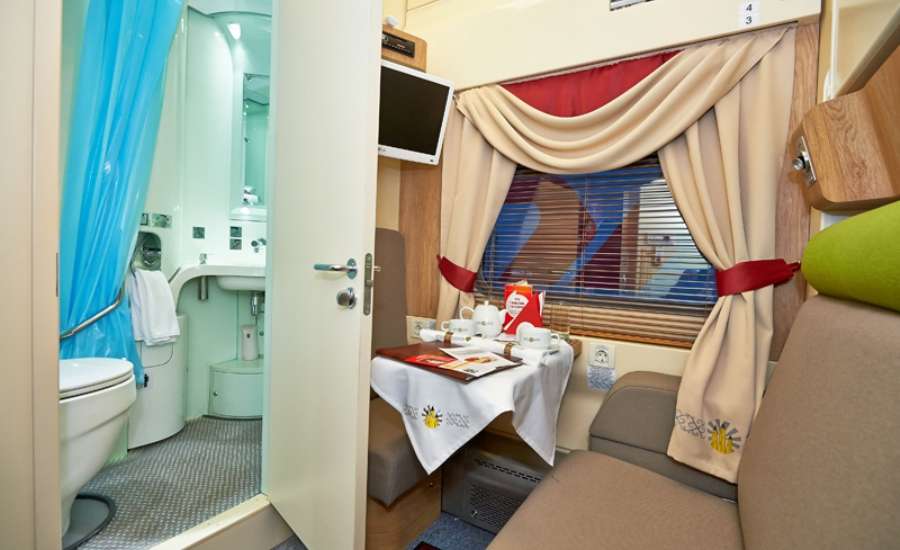 On certain trains there is the option to go one level higher than SV and travel in Lux class. Typically, a Lux cabin is 1.5-2 times more expensive than one in SV. This difference in price corresponds to the difference in size; roughly, the cabins in Lux are two times bigger than the already relatively roomy SV compartments. “Hotel on wheels” is an apt description of a Lux carriage. Each room has an en suite bathroom, wardrobe, arm chair and 120-cm wide berth. Lux also has varying classes of service and the highest one includes complimentary alcoholic beverages from the glamorous bar which can be found only Lux carriages. The only drawback to Lux, is the fact that unlike SV the second bed is an upper bed, which might be uncomfortable for older travellers.

Though 1st class cabins are slightly smaller than VIP cabins and aren’t furnished with arm-chairs, they are still rather luxurious. With two lower couchettes that fold out into roomy beds and a table for sipping tea while the world whirrs by, it’s easy to imagine how living the life of an aristocrat might have felt like one hundred years ago.