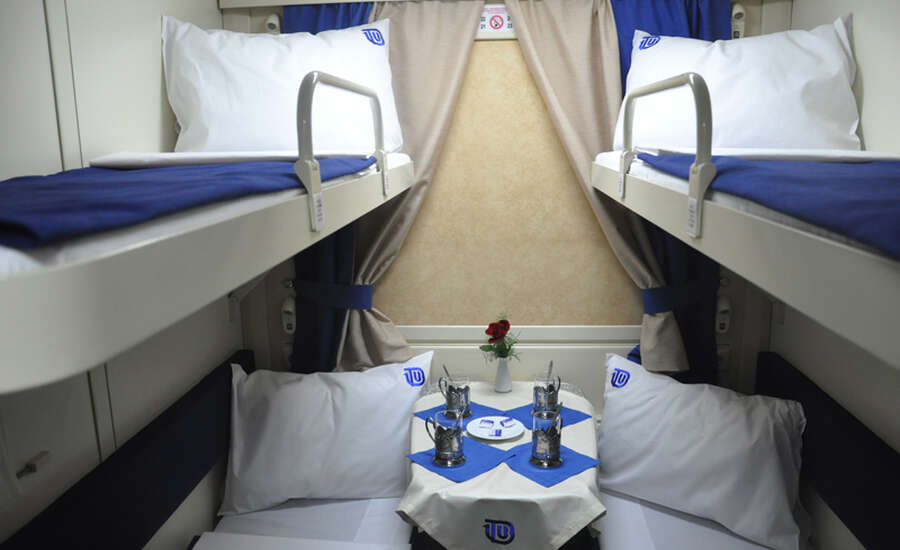 What makes kupe so wonderful?

When it comes to Russian trains, the second most popular class of travel after platzkart is kupe. The kupe is basically a second-class sleeper compartment. With foreign travelers, it is the number one option due to its happy combination of both safety, comfort and (relative) affordability. It’s widely considered to be the class of choice for business people and families and all-together decent, well-off folk who you won’t usually find drinking till the wee hours or snooping through other passengers’ belongings. Naturally, with the inherent safety, some of the adventure and fun which can be had on platzkart is lost. That being said, travelling by kupe - especially on journeys lasting longer than a day - can bring about all sorts of unique experiences with a much smaller chance of any of the negative ones that are associated with platzkart.

What is a Russian Kupe Wagon? 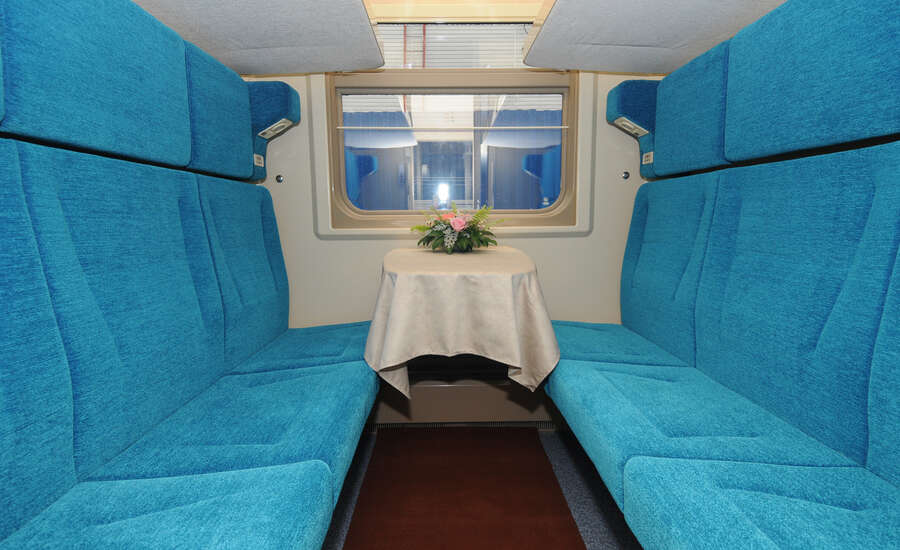 Kupe comes from French, meaning enclosed compartment, and it initially was introduced to accommodate the growing genteel middle-class who couldn’t bear the thought of travelling in “indecent platzkarts”. Unlike in Europe, where compartmentalized carriages with seats alone are widespread, kupe cabins always have sofa-beds and a solid door in place of the glass partition found in Europe. Another discrepancy between Russian kupe and foreign versions is the number of berths. While in most countries, travelers in 2nd class can expect to find anything from three to six berths in one compartment, passengers going by Russian kupe will always find four berths in the same layout (2 upper, 2 lower). That is not to say that all 2nd class carriages in Russia are alike. There are sleek wagons with usb-charging ports at every bed, a/c in each cabin and magnetic access cards, but there are also prehistoric carriages that are still fitted with the musty, blood-red Soviet carpets and WW2 speakers in each cabin that seem to hiss all night long. Though all carriages will have two toilets on either end, the criteria for a toilet can be as low as a hole and a pedal. Thankfully, there’s a surefire way to ensure you don’t end up travelling back in time to the 1960’s USSR and instead travel in a cabin not unlike a room at a decent Holiday Inn. The secret is simply to make sure to book a “firmeny” (branded) train instead of the cheaper “non-firmeny” (non-branded) trains. Regardless of the type of train you book, due to Russians’ addiction to tea and depressing books, there’s two things you can always be sure of finding in kupe; a continuous water-heater which provides tea lovers with scalding hot water free-of-charge and individual reading lamps on each bed. 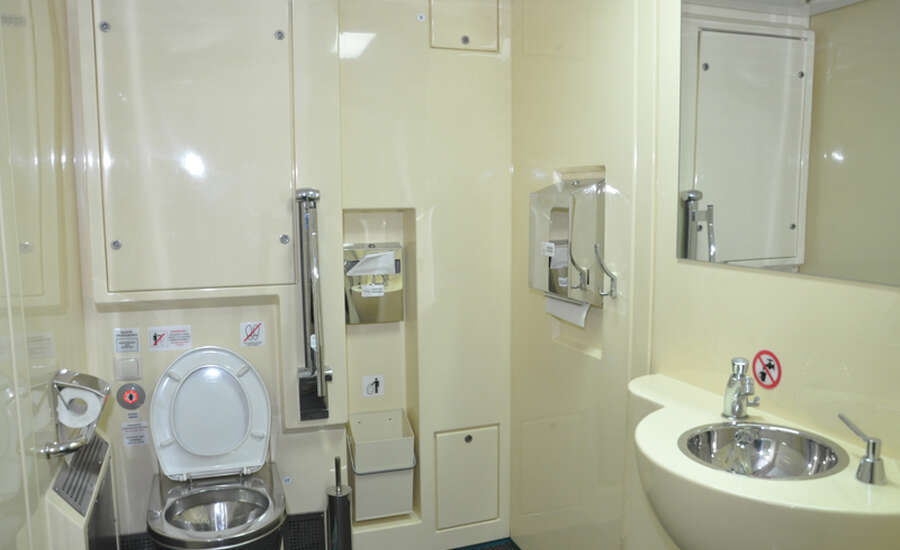 There’s a certain skill to getting changed “in private” in front of 56 other people and though quite a few Russians do indeed seem to possess this extraordinary ability, the majority of foreigners seem to fail embarrassingly at it and, unfortunately, the state of bathrooms is such in platzkart that trying to get one foot into a trouser leg while balancing on the other is ill-advised to say the least. In kupe, matters are a lot more civilized. Firstly, there are only three companions to worry about and most will offer to take turns in waiting in the corridor while the members of the opposite sex get dressed. Gender-sensitive compartments are also an option in kupe, but they are sometimes slightly more expensive. Though the style of carriages doesn’t differ much between platzkart and kupe, the quality and comfort most certainly does. When booking people often fail to realize that the beds in kupe are considerably longer than those in platzkart which, unless one is accustomed to sleeping in a z-shape, is a major plus. Kupe also offers more storage space for bags and coats and most modern trains provide amenities such as slippers and bottled water. Finally, though it is true that Russian trains are safe, the peace of mind you’ll get from being able to leave your cabin knowing that your belongings are locked behind doors accessible only by a key-card is invaluable; freeing up your mind to absorb all the new experiences.

How Much do Kupe Tickets Cost?

For most routes you can expect to pay 1500-2000 roubles (roughly $30) per day of travel. The Trans-Siberian from Moscow to Vladivostok will cost upwards of 13 000 roubles ($200), or roughly two times the price of platzkart.
And an overnight trip from Moscow to St Petersburg will cost around 1300 roubles (20 dollars).

*Very rarely during the low season, a bed in kupe can actually work out cheaper than platzkart. This generally will be an upper bunk on a less-popular route during winter. No matter what route, it’s always a good idea to do a price-check.

How to Prepare for a Trip in Kupe? 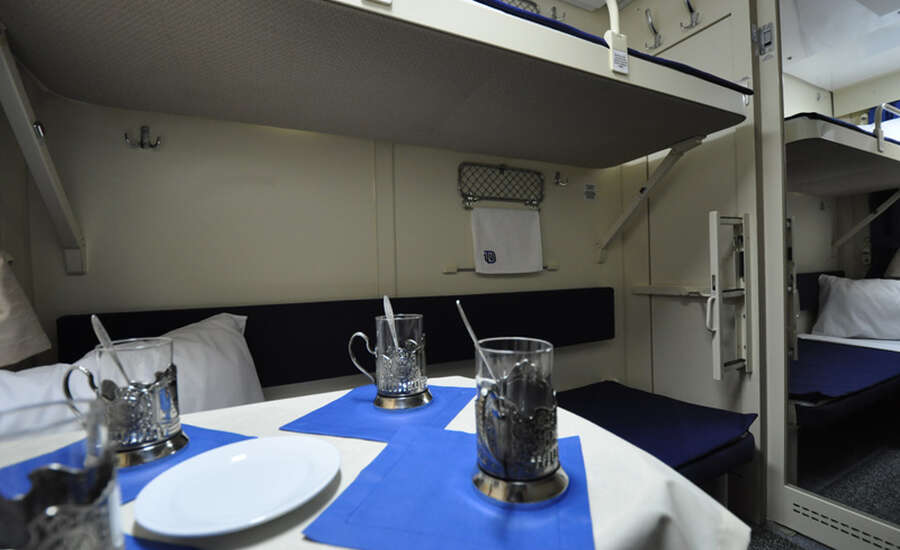 Ticket sales open 90 days before the trip and, with kupe being one of the most popular classes of transport, it’s advisable to book as far in advance as possible. Should you especially want a gender-sensitive compartment or lower berth (the higher berths can be difficult to climb up to) then booking in advance is crucial. Remember when buying tickets to include bedding in your booking. While a/c is common in most kupe cabins, it may only go down to 20c and your Russian companions will most likely whine if the temperature drops below 24c! Hence why light, loose-fitting clothes, like tracksuits are ideal, and plenty of deodorant and wet-wipes are a must regardless of what season you travel in.