What are the differences between the classes onboard the Red Arrow (Krasnaya Strela) Train?

The Red Arrow, or Krasnaya Strela is probably Russia’s most historical and prestigious overnight train. In Soviet times, the train used to carry the Communist Party’s elite on trips between St. Petersburg (Leningrad) and Moscow. Today, it still serves as an important night train, taking you to St. Petersburg from Moscow in about 8 hours. Because it doesn’t run during the day, it only has sleeper cabins, no seats. The Krasnaya Strela departs every night at 11:55 pm from Moscow and St. Petersburg alike. Like all branded trains, it comes with its own color motive, which, as a remnant of the Soviet era, is red. It’s been in operation since 1931 and to this day holds high standards of service. Let’s have a look at its different classes.

Every compartment is equipped with a table, a mirror, doors with a lock, air conditioning and a 220V socket. All tickets come with bed-linen included, and on the table travelers will find a bottle of water. 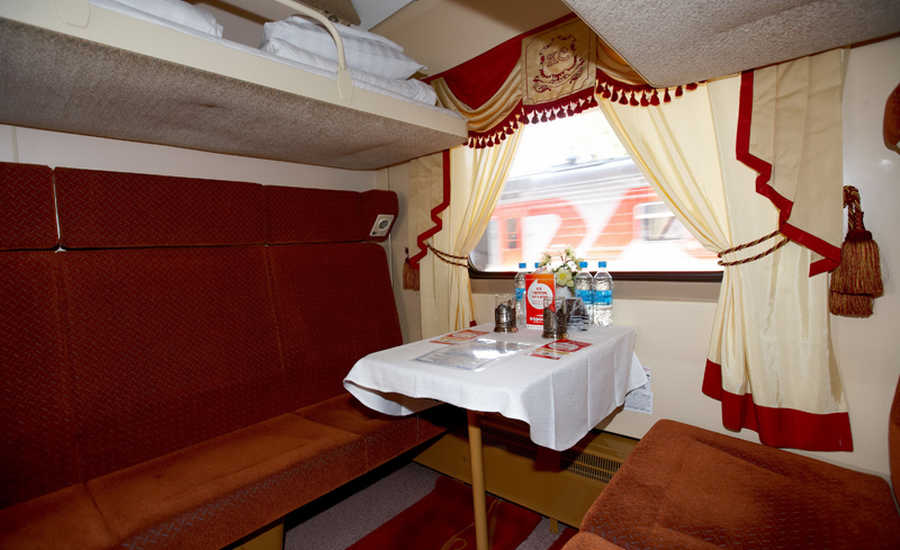 The search for the cheapest available ticket option will lead you to the cryptical class description 2К. In the Red Arrow train, this class is only for disabled passengers and people accompanying them (the cabin is for 2 persons). So although it is the cheapest class, most passengers cannot book it.

The next option is called 2T, it starts at ₽3500 (about $55). This is a bunkbed in a 4-berth-cabin called a kupe. In the railcar you’ll also find two bathrooms. Services in this class include a sanitary kit, today’s paper and access to the media portal "Poputchik". On top of that, you’ll also receive a free meal. On a side note: pets are not allowed in 2T.

The last of the Krasnaya Strela’s second classes is called 2Э. It costs as much as 2T does and comes with the same level of comfort, the only difference is that you’re allowed to carry your pets with you. Also, you can choose between a mixed compartment or a completely male or female compartment. First class on the Krasnaya Strela, also called spalny vagon, starts at a little more than ₽7000 (about $105). The services and amenities are comparable to those of the superior second class, minus the newspaper and the bedding is more comfortable. The main difference, however, is that in 1T you share your compartment only with one other person. Instead of having 4 bunk beds per cabin, first class cabins have only seats that convert to 2 sofa beds across from one another. If you want to travel alone, you can simply buy the second berth and enjoy your privacy. You also have the possibility to decide if you want to travel in an all-female or all-male cabin. Pets are not allowed.

1Э already comes with a little more luxury. Papers are included again, as is a TV. The price is identical to 1T. 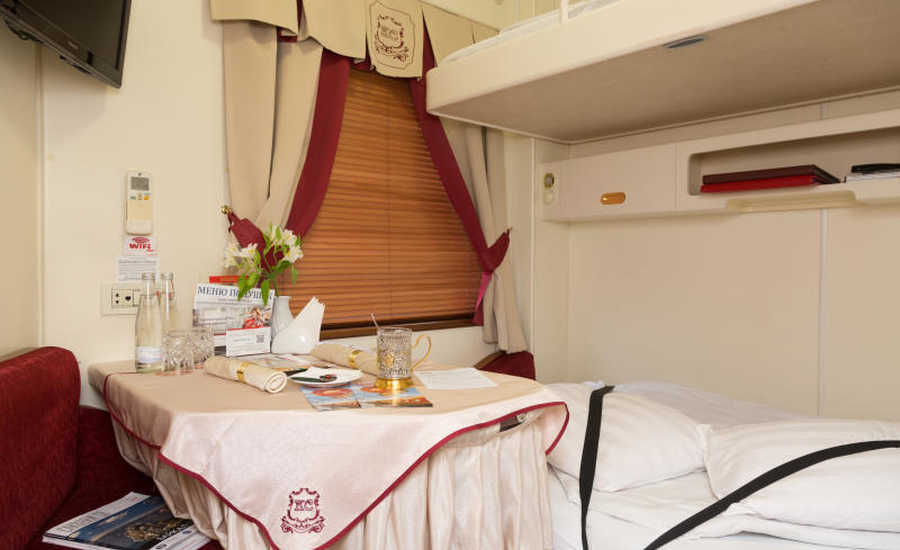 Feeling fancy? Or do you want to surprise your significant other with a romantic date night aboard the Krasnaya Strela? Then class 1A is your best bet. You’ll have access to all available amenities, plus a private bathroom and shower. Also, one berth is a foldable sofa, the other one a bunk bed on top of it. The cabin size is larger than those in the other classes. The VIP car itself is equipped with a bar. Prices for this class are indicated for the whole cabin, you can’t just book one bed. Having this in mind, traveling in pure luxury is not as expensive as it might seem: with prices of roughly ₽15000 ($234), it’s merely twice as much as a first class ticket - and valid for two people.

On the downside, there are only four VIP compartments per car, only one VIP car per train, and only one train per day, so if you’re eager to travel this way, make sure to book your tickets well in advance.

The Krasnaya Strela features three major classes: second, first, and VIP. Second and first classes come with further subdivisions, where you can indicate if you want to travel with pets or in a gender specific compartment. All of these are sleeper classes. Class 2K is the most basic one, scarce on service, but nonetheless getting the job done. Then we have the superior second classes, which already come with extra services like a meal and the paper. Regarding these amenities, everything above that doesn’t change much. Things like bed-linen get gradually more comfortable. In the first classes the 4-berth-cabin becomes a 2-berth cabin. Last but not least, the VIP class has a foldable sofa, a larger cabin size and a bar in the train car.

The well-defined, ticket class system of the Krasnaya Strela allows you to obtain exactly the amount of service and comfort you seek.