The Allegro train is a high-speed electric train operating on the St. Petersburg to Helsinki route since December 2010. The train's cars were produced by Alstom and have a number of unique features designed to work on both the Finnish and Russian railway networks. The trip from St. Petersburg to Helsinki takes 3 hours 27 min. There are up to four trains daily. The train consists of 7 carriages and has a maximum operating speed of 220 km/h.

Each individual seat on the Allegro is equipped with a folding table, adjustable backrest, individual lighting, a 220V socket between seats, a place for coats, a footrest and storage pockets for newspapers and magazines.

First and second-class seats are available on the train. First class seats are made from leather and arranged in two rows (1+2). The price of a first class ticket includes use of a self-service zone with tea and coffee, newspapers and magazines and radio headphones. Second class seats are arranged in two rows with two seats on each side. The restaurant offers passengers drinks, snacks and hot meals.
There are three carriages with special features: Carriage #2 has special seats equipped for disabled passengers, Carriage #6 has seats for passengers traveling with pets and Carriage #7 has a playground for children. Smoking is not allowed on board.

NOTE: Border crossing formalities are carried out in the train during the trip. Passengers traveling with e-visas to St. Petersburg cannot enter or exit Russia using this train! 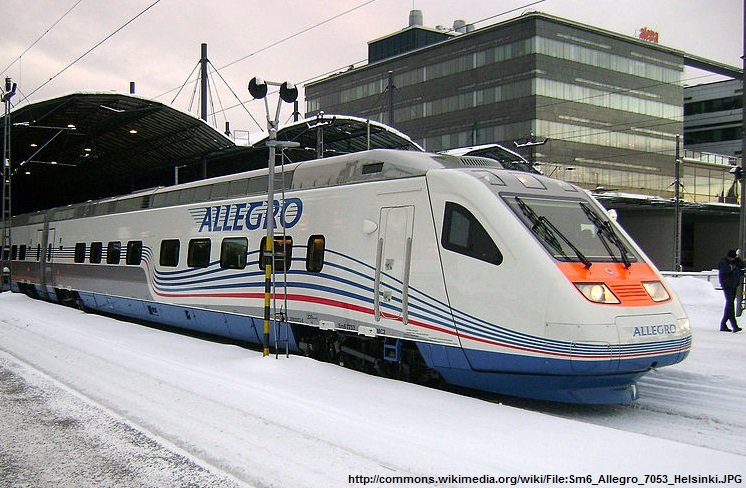 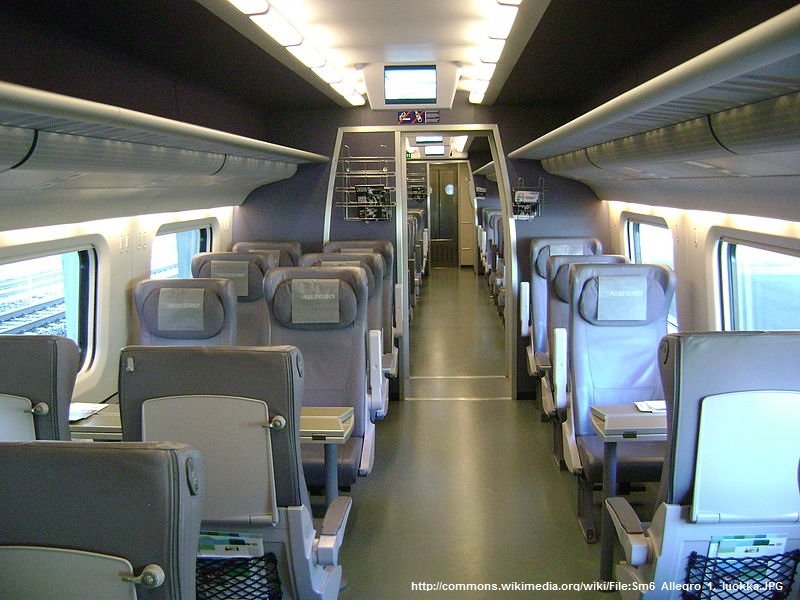 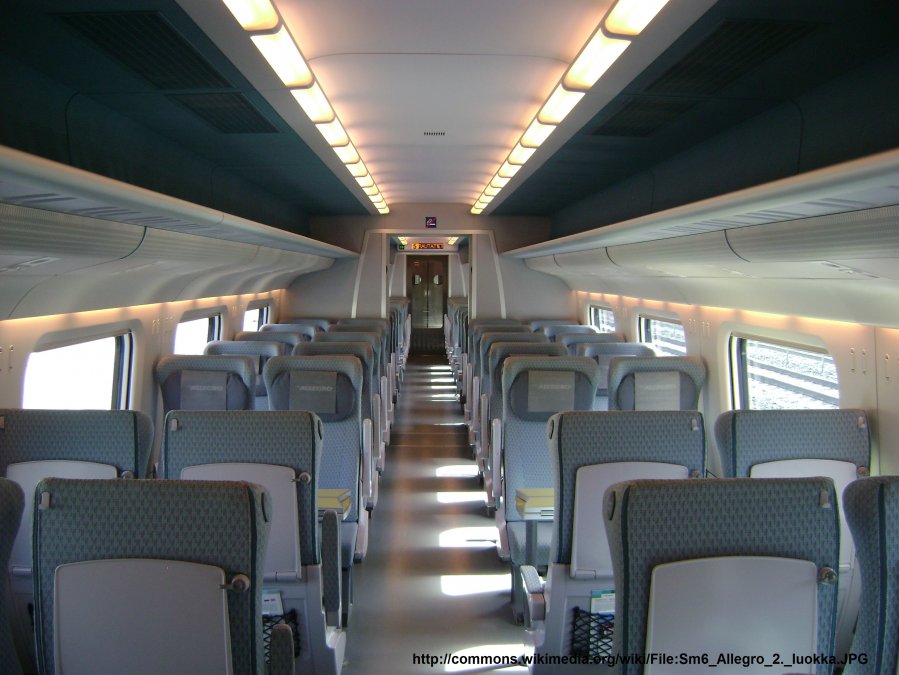 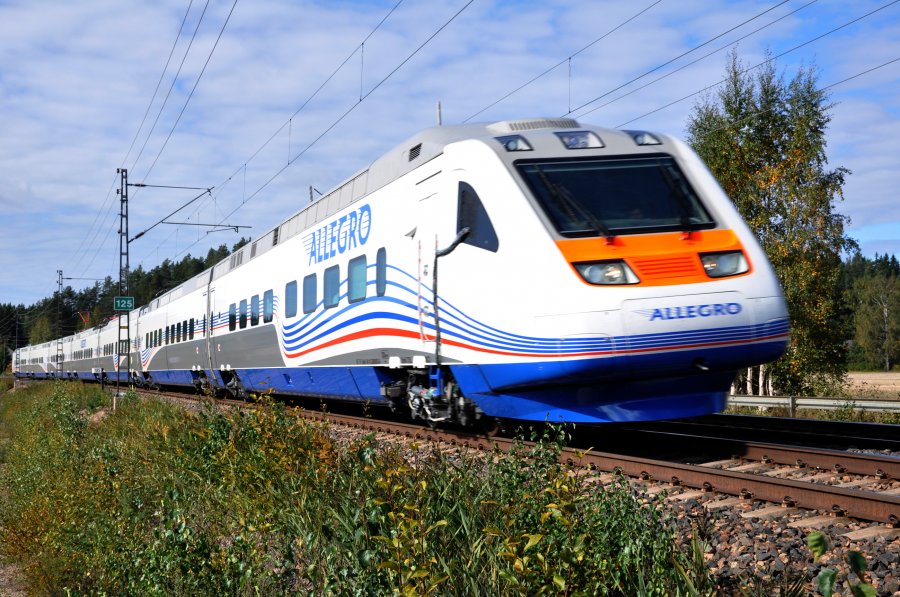 I very much appreciated the personal touch given by Russia Rail. All the arrangements were made very clear and the ticket on-line was great. No problems were encountered at all.

We visited St Petersburg in July and traveled by train from St Petersburg to Helsinki, returning 10 days later to St Petersburg. I made all arrangements through RussianRail.com, from South Africa, using the Russian Rail website. Everything worked quickly, easily and efficiently and our Russian Rail experience was very positive, from beginning to end.

Russian Rail was easy to buy tickets online. Prices were very reasonable. We bought table seats to sit with friends. There were places to charge electronics, large window, comfortable seats. The dining card had variety of food, snacks, beer, wine,assorted other drinks. The ride was very smooth. Would DEFINITELY use Russian Rail again.

I went to Russian Rail to book our journey from St Petersburg to Helsinki, having found the Finnish Rail website too confusing. I initially booked online, but the Russian Rail travel agent emailed me personally to check that I had the right date - it turned out that I had booked for the wrong month!! Thanks to the agent, my error was not costly and we had a great trip.

Really our experience with Russian Rail was flawless. Thanks to them I was able to take the train tickets from St. Petersburg to Helsinki, which was impossible from the train page. Excellent after-sales service. We will recommend it to anyone traveling to Russia.

I used Russian Rail from St. Petersburg to Helsinki... loved it. Much better then flying. My first time using rail from Russia and I would certainly recommend!

History of the Allegro Train

The Helsinki to St Petersburg train service has been running since 1870, and has been served by lots of different trains over its 150-year existence. First of all was a sleeper train which took 12 to 14 hours to complete its journey, and later the very first express train was introduced in 1897. During the Soviet period, regular tourist sleeper trains between Finland and Russia were introduced in the 1950s, and two decades later a fancy branded sleeper train was launched on the Helsinki-Leningrad route and named after the eminent Russian artist Ilya Repin. Another train, named after Finnish composer Jan Sibelius, was introduced to the line in 1992.

As early as the 1990s, it was discussed to launch a high-speed service from St Petersburg to Helsinki. This idea finally came to fruition in late 2010, when the Repin and Sibelius services were retired and replaced with the high-speed Allegro train. Allegro is the most convenient and efficient of all the Finland to Russia trains, with a journey time of less than 3 ½ hours and multiple daily departures. The service includes customs and passport checks en-route, eliminating the need for disembarking and long queues at the border and allowing for an even quicker journey. Other on-board services include a kids’ play area, currency exchange, free drinking water, and a Finnish-Russian restaurant menu. What’s more, passengers travelling from St. Petersburg to Helsinki on the Allegro train are entitled to a free train journey to Helsinki Vantaa Airport, if they travel within 80 minutes of the Allegro’s arrival (this is also the case for arrivals to Helsinki airport who are travelling on to St Petersburg with Allegro).

Did you know? One of the passengers aboard Allegro’s maiden journey was Vladimir Putin.

Prior to the pandemic, half a million passengers travelled annually on the Allegro train – the service made Russia’s cultural capital one of the top tourist destinations for Finns, nearly as popular as Stockholm and Tallinn. Although the Allegro was suspended in March 2020 due to the pandemic, as of October 2021 the Russian and Finnish governments have agreed to resume the service, with hopes that Allegro will finally be running again by New Year of 2021!

Please bear in mind that you are not allowed to cross the Russian-Finnish border by train with an e-visa! 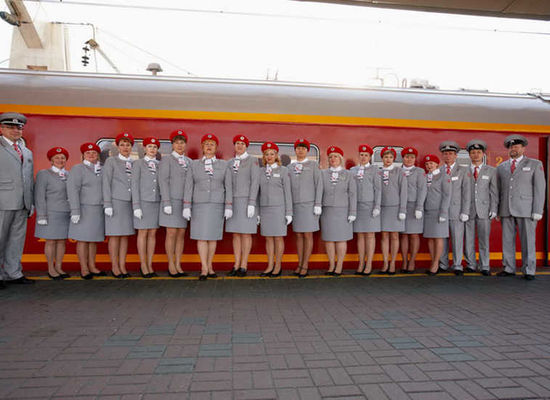 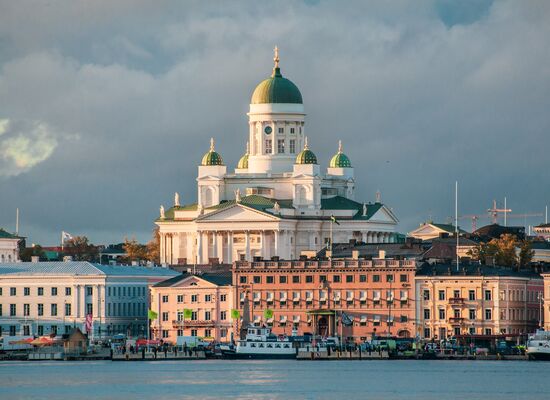