The Most Popular Trains on the Moscow to St. Petersburg route 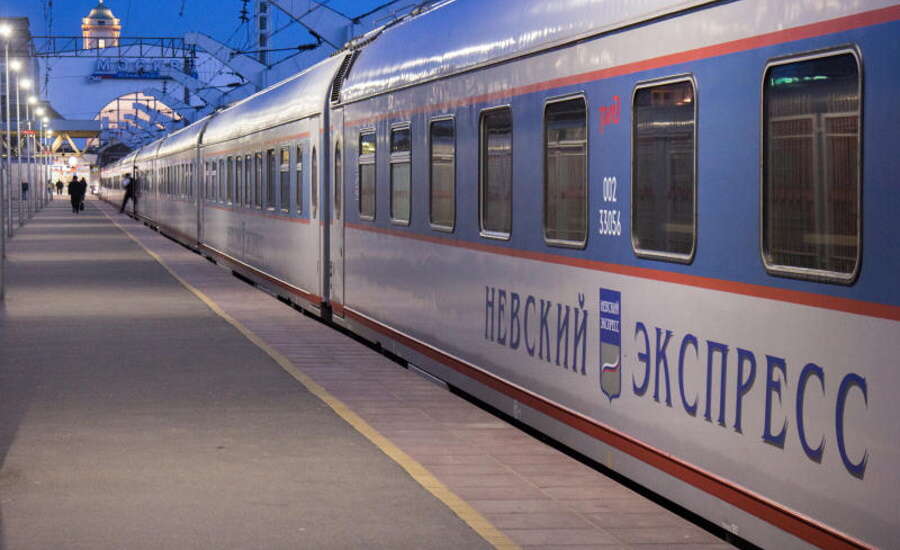 What are my options when travelling between Moscow and St Petersburg by train?

On a once-in-a-lifetime trip to Russia, it would be a pity to only see one of the two capitals. Luckily for you, Moscow and St Petersburg are well connected and a quick hop on the train is by far the best way to travel between the two. There are several different options to suit the schedule and preferences of all travellers – from a stylish high-speed train favoured by businessmen, to a luxurious sleeper equipped with all the amenities (and even free chocolates!) What are the most popular Moscow to St Petersburg trains and where can you buy Russian train tickets? 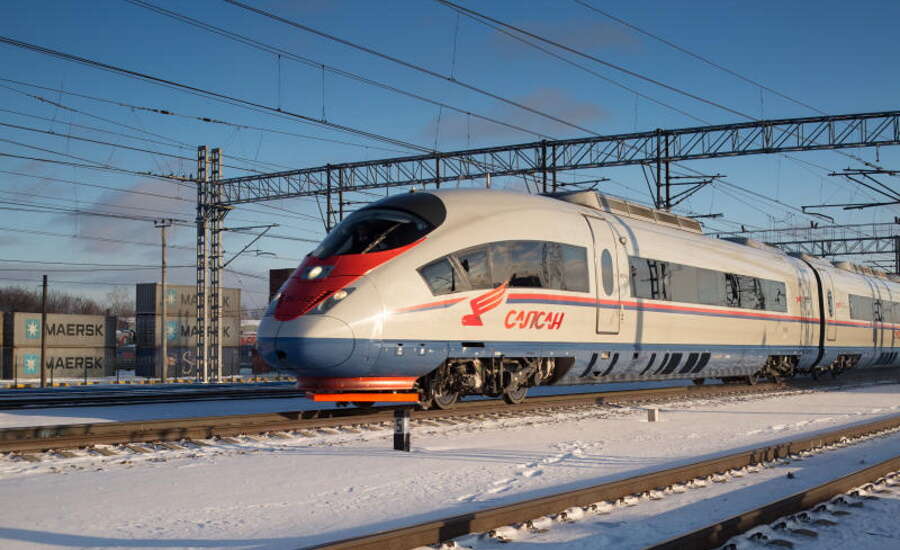 Its name meaning ‘peregrine falcon’, the Sapsan train is the fastest of all Russian trains. It speeds between Moscow and St Petersburg in a little under four hours, allowing you to admire the landscape through the train’s panoramic windows while travelling at speeds of up to 250 km/h. With dozens of departures per day, Sapsan is a very convenient way to travel as your departure can easily fit into your holiday itinerary.
Passengers are treated to modern and high-quality service which (depending on seat class) includes complementary films and Wi-Fi, reclining seats, power sockets, air conditioning and Wi-Fi, and a seat buffet service. Tickets are available in several classes: Economy, Economy+, Business, First Class and Dining Class (passengers are allocated a seat in the restaurant car for the duration of the trip). If you’ve got an action-packed trip to Russia and want to make the most of your time there and manage to visit both the capital cities, Sapsan is certainly the best option for you.
Sapsan train tickets generally start from 3,000 roubles for an economy ticket and 5,500 roubles for business class. 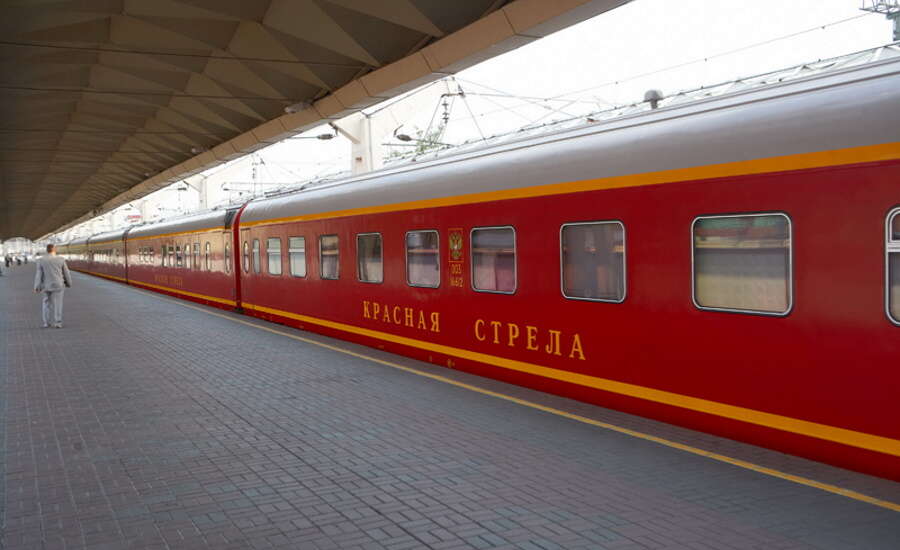 Russia’s oldest train is the Red Arrow (Krasnaya Strela). Since the early Soviet period this was the transport method of choice for the Soviet elite travelling between Moscow and Leningrad, and in modern Russia this characteristic red train is the country’s first and most famous luxury sleeper. One train operates per day in each direction, departing just before midnight and arriving at 8am – a convenient time for you to start exploring a brand new city!
Passengers aboard the Red Arrow travel in first or second class cabins which sleep 2-4 passengers respectively. Each cabin is carpeted and decorated with red and gold curtains, a table complete with tablecloth and flowers, and red velvet seats which transform into the lower bunks. All beds are made up with fresh linen and each passenger receives a wash kit and complementary meal during their trip. Those who desire an even more opulent journey can travel in the ‘Luxury’ cabin. Twice the size of a 1st class compartment, this cabin is also equipped with a television and private toilet and shower.
Moscow to St Petersburg train tickets on the Red Arrow start from around 3,000 roubles for second class, 5,000 roubles for first class, and 10,000 roubles for the luxury compartment (a flat rate to book the entire cabin). 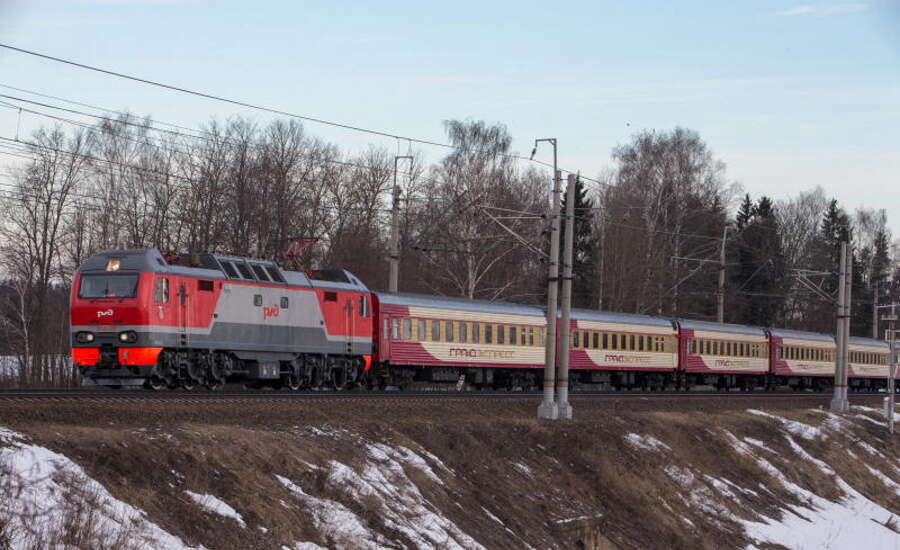 If you are travelling between Moscow and St Petersburg on a special occasion, or just prefer to travel in the lap of luxury, then the Grand Express is the train for you. Often referred to as a ‘hotel on wheels’, it is Russia’s most extravagant train and the only private luxury train company operating in the country. Much like the Red Arrow, the Grand Express departs once a day from Moscow and St Petersburg just before midnight and arrives at its destination after 8am the next day.
Every compartment is equipped with a television and Wi-Fi access – even the economy class cabins, which is a real luxury on a Moscow to St Petersburg train! Aside from this, first class passengers enjoy free transfers; premium class cabins are equipped with one or two beds and a private sink; Grand class cabins have a mini shower and toilet, DVD player, a larger bed and free fruit and chocolate; and the crème de la crème – the Grand Imperial cabin – boasts a full-size shower, leather sofa and luxurious adjustable bed, as well as a private bar and restaurant in the carriage.
Prices for economy, first class and premium cabins are comparable to the second, first and Luxury cabins on the Red Arrow (although the Luxury cabin on Red Arrow offers more for its money). The real price difference on the Grand Express is the luxury cabins: Grand class cabins start from 20,000 roubles and Grand Imperial cabins from 30,000 roubles (both are flat rates to book the whole cabin).

The high-speed Nevsky Express makes the Moscow to St Petersburg train journey in just over four hours. Unlike the Sapsan, only one of the Nevsky Express carriages is open-plan. The other cars feature compartments of six seats, which makes this a great way for a family or group of friends to travel in private. On Mondays, Wednesdays and Fridays one train departs in the afternoon from the two capitals, arriving in the early evening. There are only economy class compartments on the Nevsky Express, so if you’re looking for luxury high-speed travel then the Sapsan would be the better option for you.
St Petersburg to Moscow train tickets for Nevsky Express are slightly cheaper than Sapsan tickets, starting at around 2,200 roubles.
There are so many ways to travel between Moscow and St Petersburg, and electronic tickets are available which make your travel arrangements quick and easy. To learn about the different transport options and book your tickets, search our website.