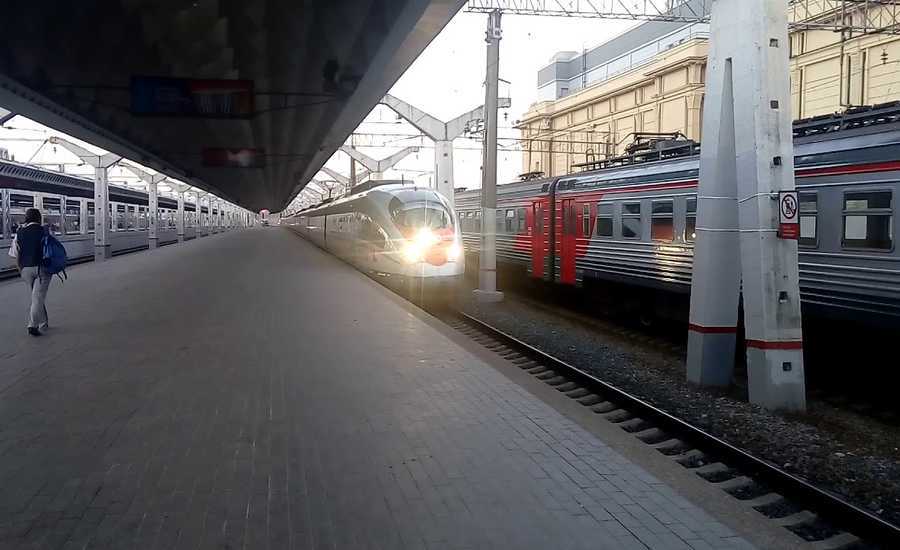 Is it better to take a day or night train from Moscow to St. Petersburg?

Maybe you’ve read our article on the best ways to travel from Moscow to St. Petersburg and you’ve decided to take a train. Now you need more information on which train. There are so many options, so many possibilities. But don’t worry, we’ve got you covered.

Trains from Moscow to St. Petersburg and back run every day, departing in the middle of the night, the early morning, evening or afternoon. If you want to travel by day, you will most likely buy your ticket on the Sapsan, Russia’s new highspeed bullet train or the Nevsky Express. If traveling by night, the best trains have romantic names like Grand Express, Krasnaya Strela (The Red Arrow), or Megapolis and will take you from Moscow, Russia’s capital to St. Petersburg, the Venice of the North on the Neva from 7 to 10 hours.  The main difference between the two is that a trip on a night train will take many hours, and you’ll probably end up sleeping in a berth for most of the time. While this might sound inconvenient in comparison - day trains travel speedily, and you’ll be at your destination within just a few hours - night trains can also be less expensive and have that very romantic, Russian feel about them. 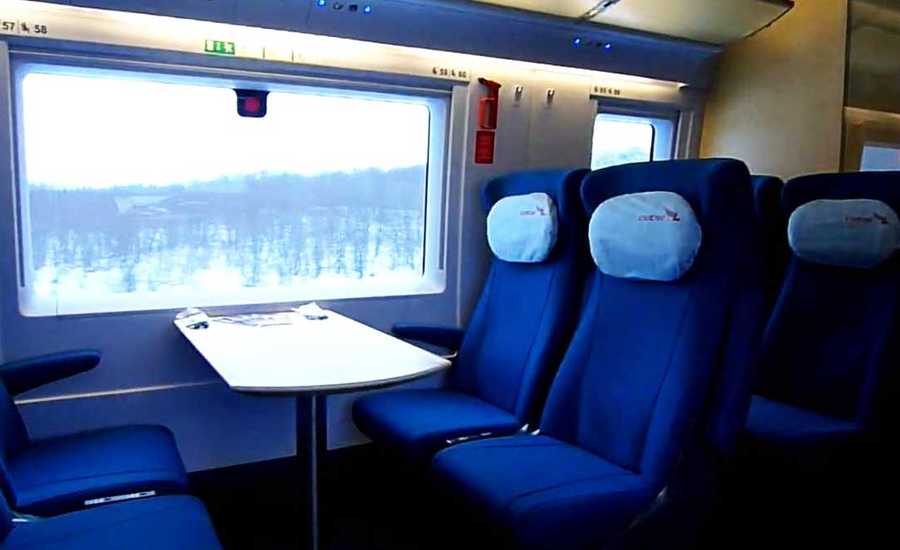 Most day trains, like the above mentioned Sapsan and Nevsky Express, are high-speed trains. The Sapsan makes only 2-5 stops between Moscow and St. Petersburg and is built for speed. It will get you North to St. Petersburg in a comfortable 4 hours at an average speed of 250 km/h. The Nevsky Express train averages lower speeds - around 200 km/h - but it doesn’t have any additional stops, therefore effectively taking as long as the Sapsan. Both the Sapsan and Nevsky Express are modern, comfortable and equipped with everything you would expect on a standard European intercity train. But with the comfort comes a price: The Sapsan and Nevsky Express ticket prices for the lowest class start at around ₽3000 ($50) and go up to ₽15000 ($235) for a first class experience that includes a personal entertainment system, leather seats and charging ports for your phone. Learn more how these two trains differ in our article. 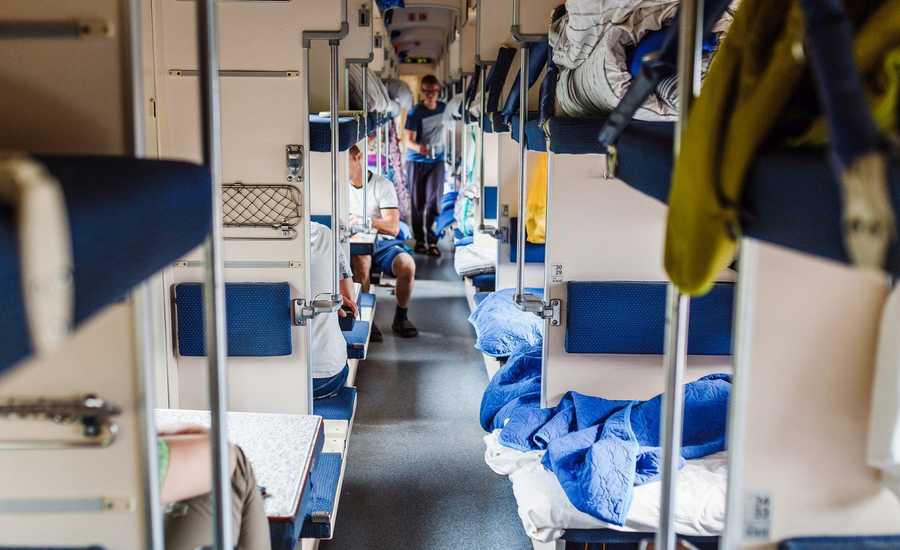 Night trains are a bit more complicated. First, we have to divide them between branded (firmenniy) and non-branded trains. A branded train has a number that starts with a 0 and is followed by two numbers and a letter, like № 064A, and also typically has a name, such as Two Capitals for example. These trains are privately run and often come with their own design or motif. They usually offer higher quality service than regular trains and provide amenities such as hot meals, better bed linen and a restaurant car. On top of that, they are slightly faster than their non-branded siblings, making the journey in 7 to 8 hours instead of 9 to 10. Ticket prices come in three classes: first class (Spalny Vagon or SV), second class (Kupe) and third class (Platskartnyi), they range between ₽2400 ($40) and ₽9000 ($140). Third class tickets give you a berth in an open car with 56 beds. A kupe is a relatively private compartment consisting of two bunk beds (sleeps 4 passengers), and in the Spalny Vagon you have two sleeping berths.

Non-branded trains are recognizable through a combination of a three-digit-number and a letter, like № 146У. Their service usually includes a samovar with free hot water in the corridor. They also come with a third and second class, and some of them also offer a seated option for an unbeatable price of ₽800 ($13). Platskartnyi tickets cost ₽1500 ($25) and Kupes can be booked for around ₽2000 ($31). They don’t have first class. 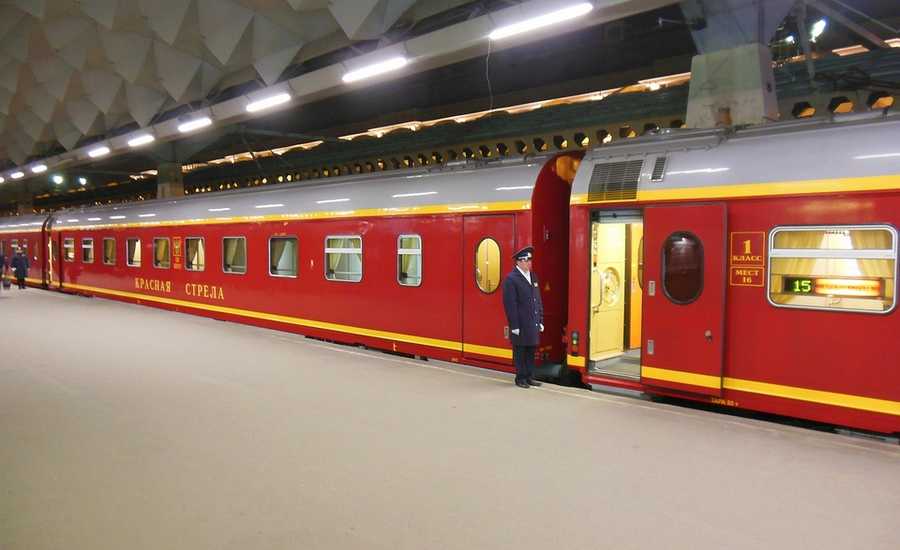 Russia’s most prestigious and historic night train is called Krasnaya Strela, The Red Arrow. Back in the day it used to carry the Communist Party’s elite, now it serves to transport all kinds of passengers. Its color motive is red and it is decorated with wooden features and thick velvet curtains. Travelers can choose between deluxe, first and second class, ranging from ₽3000 ($50) to ₽13000 ($205). The train leaves Moscow and St. Petersburg every night at 23.55. The journey takes 8 hours and doesn’t have any stops — the train is just slow. However, it has its own theme song that is played on departure and arrival!  How about that! 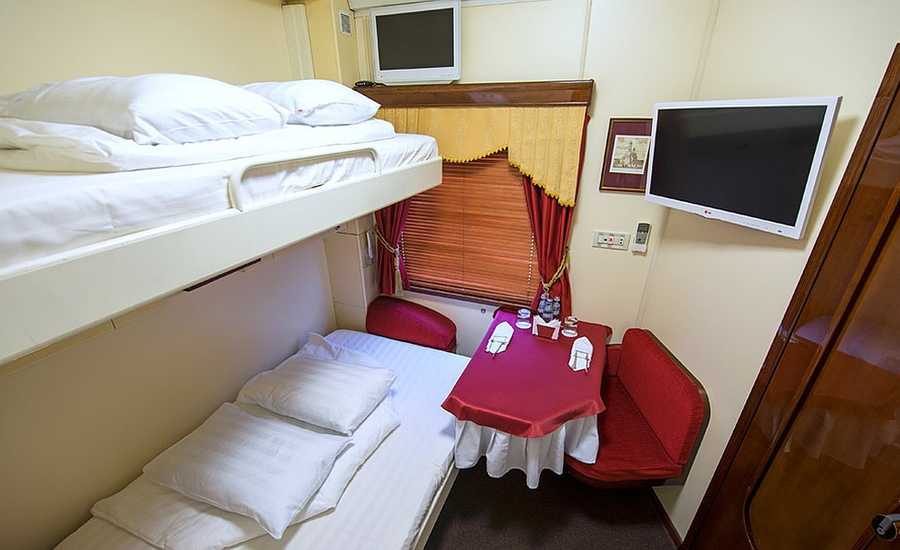 For the most luxurious overnight travel experience, try the Grand Express. Their level of comfort is compared to that of a hotel, featuring high quality furniture, an entertainment system and internet in every class, and additional private bathrooms for each compartment, individual air conditioning, a hot breakfast and more in the higher classes. They have 15 cars with different classes. Prices range from ₽2800 ($48) to ₽23000 ($360).

Day trains are mostly high-speed trains, covering the distance between Moscow and St. Petersburg in 4 hours. They are fast and efficient but don’t make for such a unique experience – being very similar to other highspeed trains throughout the world.  Night trains are divided into branded and non-branded trains, delivering different levels of comfort and service. If you’re opting for the cheapest way to get from Moscow to St. Petersburg, take a non-branded night train. If you’re looking for a more comfortable, but equally authentic experience, choose a branded train like the historical Krasnaya Strela (Red Arrow). And if you just want to get the job done, the high-speed trains will do the trick.