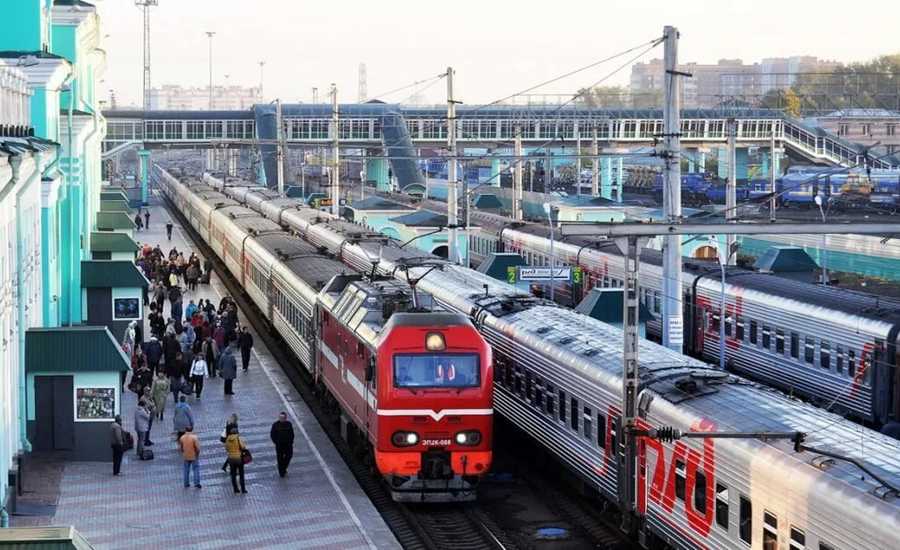 Given the vastness of Russia’s territory, train journeys are commonly measured in days, rather than in miles or kilometres. But what better way to truly experience the diversity of the Russian landscape? Travelling by train is so much more atmospheric and exciting than by plane. Instead of jumping from one place to another with no sense of your surroundings, you see the forests of Siberia pass by, experience the vastness of the steppe, observe one city melt away and another gradually appear, all from the comfort of your seat. Most long-distance train journeys begin or end in Moscow, so if you’re looking to start your adventure, that’s where you’ll want to be. Train stations typically take the name of their final stop – so the ‘Moskovskii’ station in St Petersburg serves routes to Moscow, and from Moscow‘s ‘Kazanskii’ station you can hop on a train to Kazan.

What are the different options for train travel in Russia?

Train types according to service provided 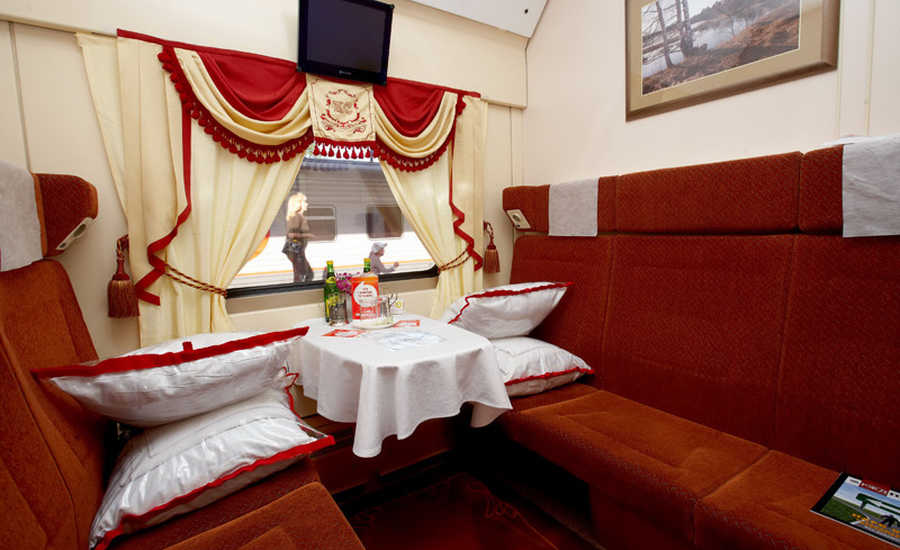 Special (firmenny) trains are branded Russian trains. They are more expensive but have a higher quality of service, and consist of modern 1st, 2nd and 3rd class carriages. On board you’ll typically find air conditioning, tea and coffee making facilities, a kiosk with souvenirs and simple products, and a restaurant with interior decoration individual to each train. Some cities run their own particular trains and invest a lot of attention into the quality and comfort of the service, often naming the trains after nearby places of geographical interest. For example, a train provided by the city of Perm has been named ‘Kama’, after the Kama river which runs through the city. Another famous example is the ‘Rossiya’ train which transports passengers across the entire length of Russia, from Moscow to Vladivostok. We sell train tickets for all branded trains. 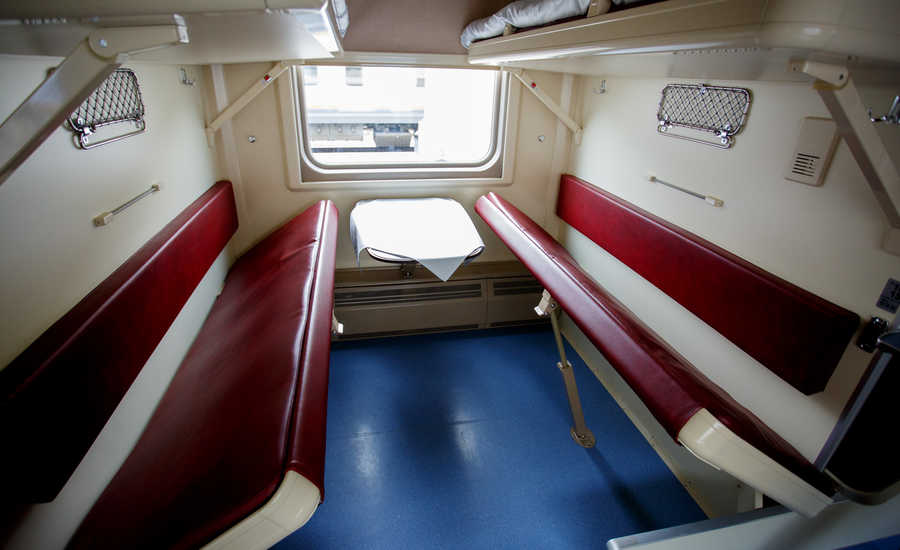 These trains provide an efficient, regular, and reliable service, although generally without the first-class luxury of the branded trains. Non-branded trains also provide long-distance services and typically serve more stations, and are a popular mode of transport amongst travellers. 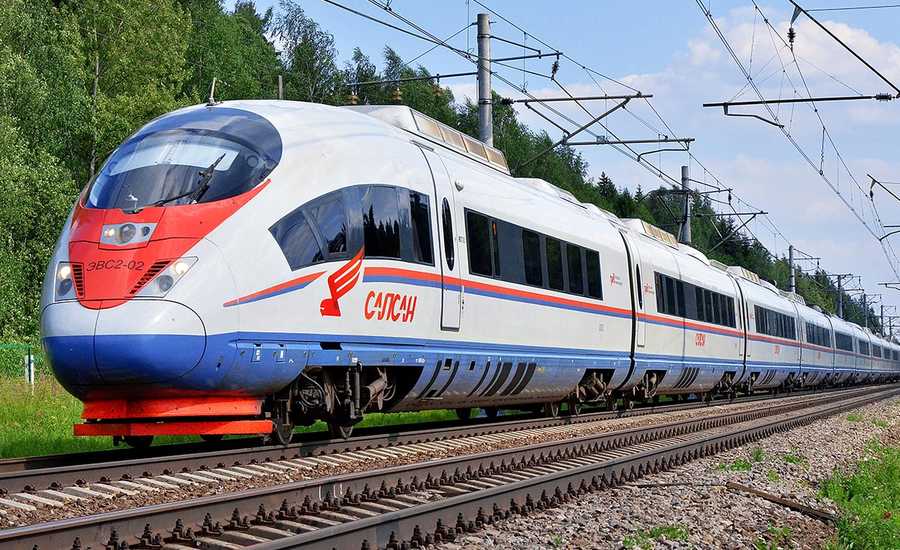 High speed trains travel between 90 and 200km/h and are a very efficient way of travelling by rail, although they do not serve the vast majority of Russia’s territory. The newest and most popular of Russia’s high-speed trains are named after birds: Sapsan (Peregrine Falcon) and Lastochka (Swallow).

Sapsan trains serve the route between St. Petersburg and Moscow. Service is very professional and efficient and trains are modern and comfortable, with reclining seats, a seat buffet service, and free films and TV shows. A journey on the Sapsan can transport you between Russia’s capitals in less than four hours, compared to the eight-hour journey on the sleeper train. They are ideal for business people as the Sapsan trains provide wifi, a private conference room and on-train offices.

Lastochka trains serve suburban areas in the vicinity of large cities, and are modern and efficient. They are popular among locals and tourists alike as they are quicker than regular suburban trains. 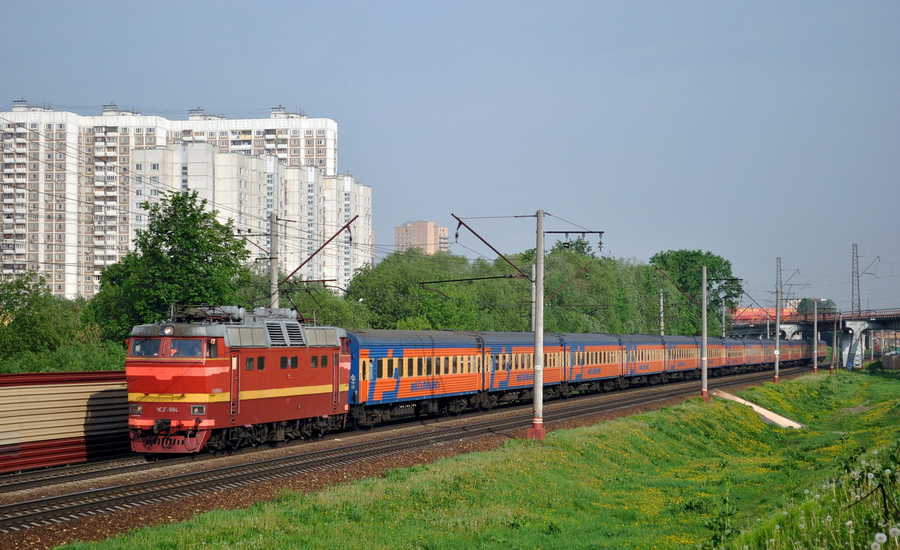 Express trains travel at an average of 50 km/h to 91 km/h and comprise the vast majority of Russia’s long-distance services. Both branded and non-branded services use express trains, with the difference being the level of service you can expect while travelling. 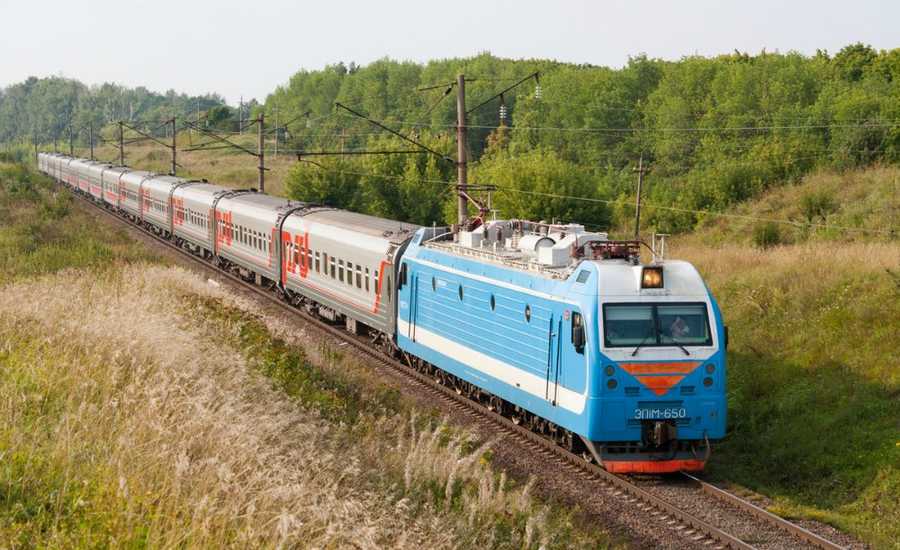 These trains travel relatively slowly, at less than 50km/h, and serve every station along their route. If you are a patient person and want the opportunity to properly admire Russia’s landscapes, this may be the choice for you! But if you’re on a tight schedule, maybe seek another method of transport. 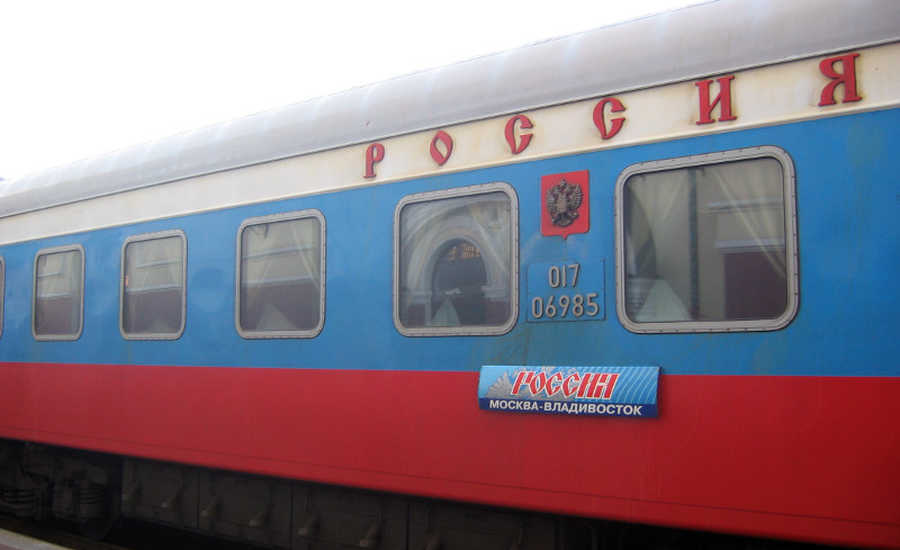 Long-distance trains serve routes of over 200km. Long-distance services can vary greatly by speed travelled and the level of service and comfort offered. Trains serving long-distance routes are sleeper trains and journeys are measured in sutki (24-hour periods). 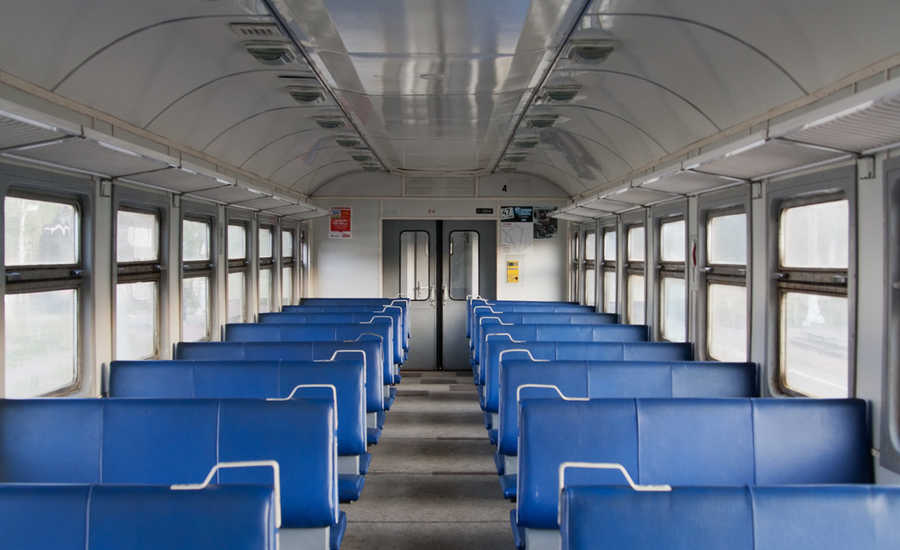 Elektrichki are widely popular methods of transport, connecting large cities with their suburbs and rural districts. Older elektrichki are not the most comfortable, with metal or wooden benches and brown/grey interiors, although these trains are often upgraded to provide a higher level of comfort. Regardless, you can enjoy the entertainment provided by buskers passing through the carriages and admire the scenery outside. Travelling by elektrichka will give you the most authentic experience of Russian everyday life. It is a very popular way of travelling to the dacha (summer house) or the countryside or seaside, and when the weather is good these routes are often busy. Tickets can be purchased for a very reasonable price at all Russian train stations, both at self-service machines or at the cash desk. 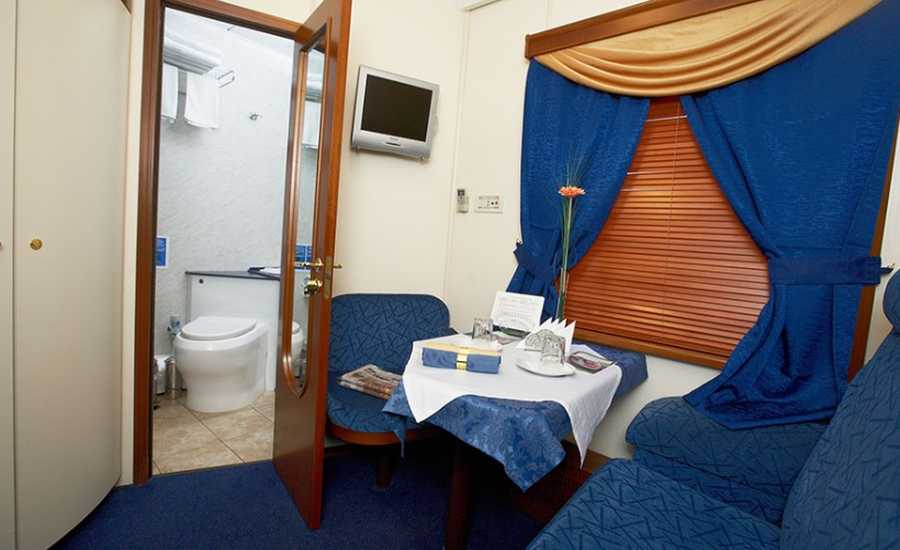 VIP carriages contain four, five or six compartments, and those with four boast the luxury of an in-carriage bar! A VIP cabin is double the size of a standard one, and can be locked from the inside. Your room will be equipped with a double bottom-bunk and single upper-bunk, desk, armchair, storage space, adjustable air-conditioning, power sockets, TV/DVD, and Wi-Fi. VIP passengers have the luxury of their own private bathroom with a shower (a rarity on Russian sleeper trains), sink and toilet, and bathrobe and slippers are provided. And it doesn’t stop there - the bathroom floor is even heated! 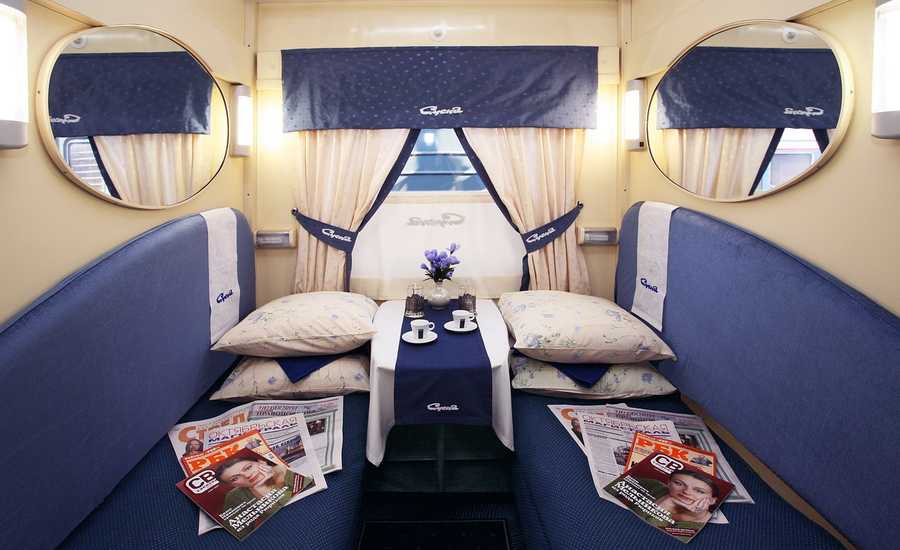 First class (also known as SV) is the comfortable and exclusive option most commonly available on Russian trains. The cabin is designed to accommodate two people, with two long couches which can be converted into sofa-beds, and a table. On some services, first class compartments can include showers. If you are a solo traveller and really want to travel in style, it’s possible to purchase both tickets for the first class cabin. 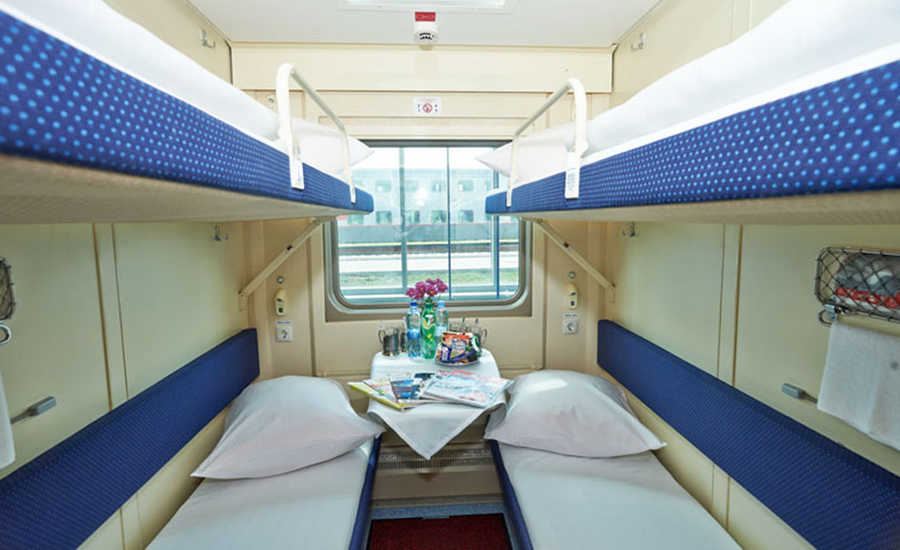 The next option is a 2nd class cabin, or kupe. These compartments accommodate four people, with two lower and two upper bunks and a table. Kupe cabins can be locked from the inside and have luggage storage space above the door. It’s worth knowing that some trains offer ‘female only’ or ‘male only’ cabins. Learn more about this train class in the article. 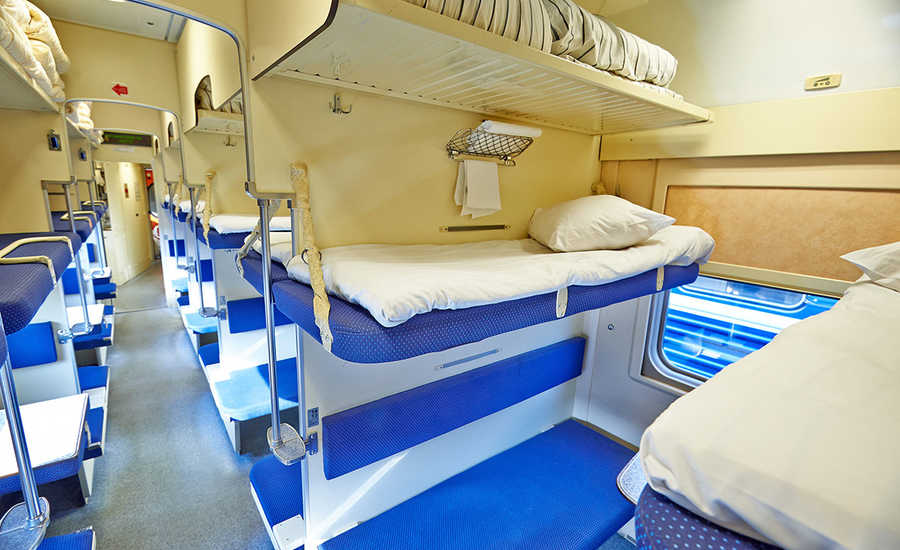 3rd class, or platzkart, is even cheaper. The arrangement is two upper and lower bunks perpendicular to the window, a narrow aisle, and one upper and lower bunk alongside the opposite window. This layout runs the entire way along the carriage, with no doors or curtains. If you are concerned about locking away your luggage and having privacy, platzkart is not for you, but if you’re trying to save money and don’t mind the lack of privacy or quiet, then it is a convenient option.

For solo women travellers who cannot find a ‘female only’ kupe and feel uncomfortable sharing a cabin with three strangers, platzkart may be a better option. And for those travelling in southern Russia during summer, platzkart carriages have better ventilation than 2nd class cabins - four people in a small space without air conditioning can be quite stifling. Platzkart is best of all for travellers who want to socialise with Russian people and learn a bit of the language! Please take note that bedding is provided in all classes of sleeper carriage. 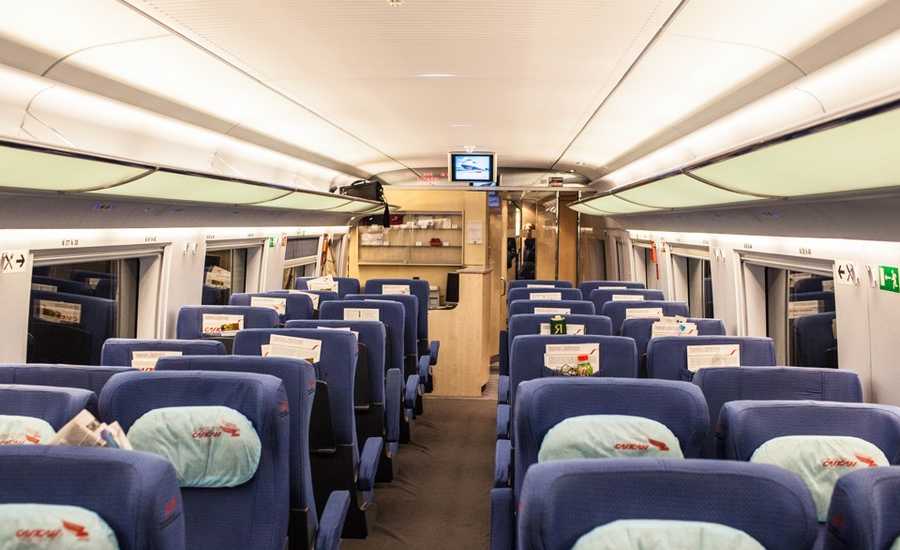 The cheapest option for travelling by train are simple seated tickets, with seats similar to those found on airplanes. On the Sapsan route between St Petersburg and Moscow, and the Allegro service operating between Russia and Finland, more expensive tickets come with extra leg-room and reclining abilities. When travelling on the Sapsan, tickets booked in advance can even be cheaper than the sleeper train!

As you have seen, there is an enormous variety of options when travelling by train in Russia. You just need to decide what is most important and convenient for you, and enjoy your adventure.